And I’m back with some more Assassin’s Creed III Mission Design analysis. This time, we’re looking at Mission 3 of Sequence 6 – The Tea Party.

So, Connor helps the Sons of Liberty with the Tea Party because he’s after William Johnson, who wants to buy the land Connor’s village stands on. No tea = no money for Johnson = village is saved, or so Connor thinks at least.

Now, I think this is one of the better Assassin’s Creed III missions, and I enjoyed playing it. Heck, I was replaying it now, and I still had fun. However, there is still room for improvement.

Objective 1 – Eliminate guards
Before the Sons of Liberty can get onto the ships, they need to eliminate the people guarding them. Now, this takes place after the mission where we got introduced to Stephane’s ability to start riots. So, obviously, this is the mission we’re going to use it in action, right? I mean, even in the cutscene prior to the objective, they say that they have to use the crowd’s anger to their advantage, and Stephane volunteers to make it so if Connor commands. But there’s a slight problem. 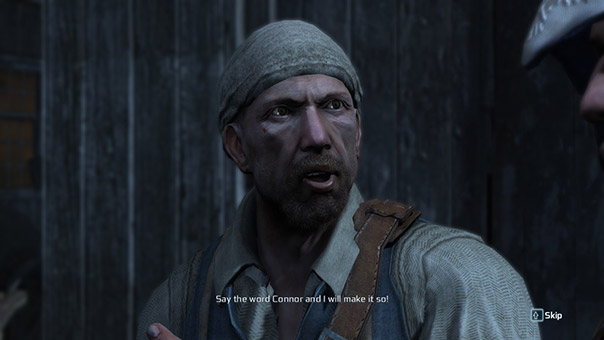 The ‘Riot’ ability is disabled in this mission. If you got the other two Boston Assassin Recruits, you can use them, but the ability that you were introduced to in the MAIN STORY mission before that (to teach the concept of Assassin Recruits abilities), you can’t use it here. That makes no sense. Stephane should be able to bring an angry crowd to distract the guards.

The ‘Marksman’ ability is useful, especially on the southern side of the pier, where there’s only six guards. If you’ve got three Assassin Recruits (and if you replay the mission even when you have 6 recruits, you get switched to three, which… I’m okay with this, honestly), then they shoot three guards from the rooftops and then quickly jump in and dispatch the other three guards before they even know what’s going on. 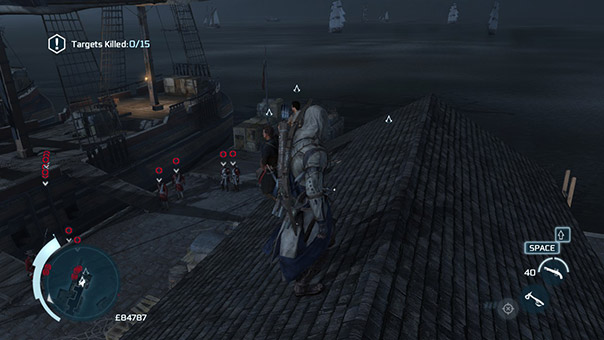 The ‘Bodyguard’ ability is absolutely useless, because there’s no Notoriety in this mission. But, if you’ve went through the trouble of getting the Assassin Recruits before this mission, you want to make use of their abilities, right? I think this is easily fixed. Activate notoriety, make the boat area restricted and add a few additional guard posts blocking the main entrances to the piers. So if they start suspecting you, the bodyguards quickly dispatch them and you can continue in without raising alarm. We can say that if the front guards notice you, then everybody who guards the side you were noticed in engages you (which is also what happens if you try to get on the ship through the boarding ramp if the guards are alive). 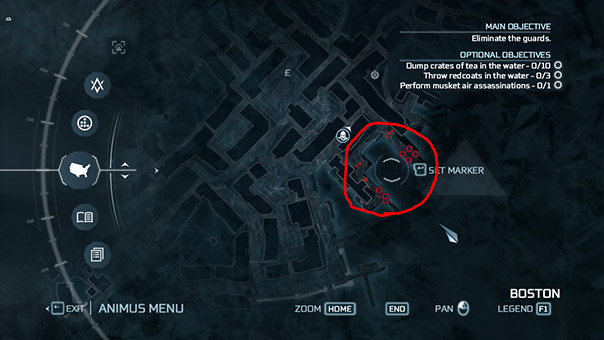 But, other than that, why would you want to take the stealth approach anyway? I mean, the guards for both ships are stacked pretty close together (although you can add a few big crates that block the view or something), so the only reason to act stealthily would be to… prolong the time you act stealthily a little bit. Or is it the only reason? 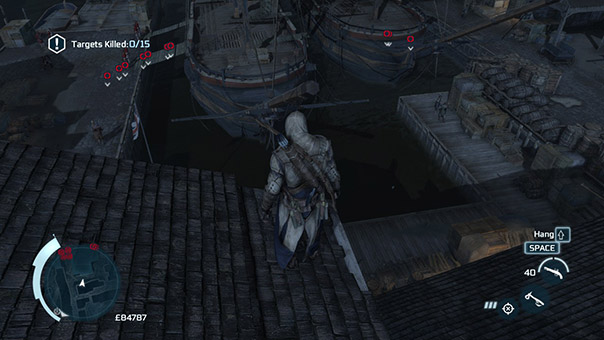 I found this cool way onto the ships through the rooftop that you can take and no guard would notice. It’s a shame that there really is no reason to take that route. Which is when I got the idea of adding an optional Full Synchronization objective in this part. Kill the Captains of the two ships. Now, here’s the tricky part, the Captains are cowards, so if the guards of the ship they’re on are alarmed (and I tested, if the guards of one ship notice you, the guards of the second ship which are on the other side of the pier are still oblivious, I’m fine with that), they just run the hell away. So a more stealthy approach for this part would be nice. 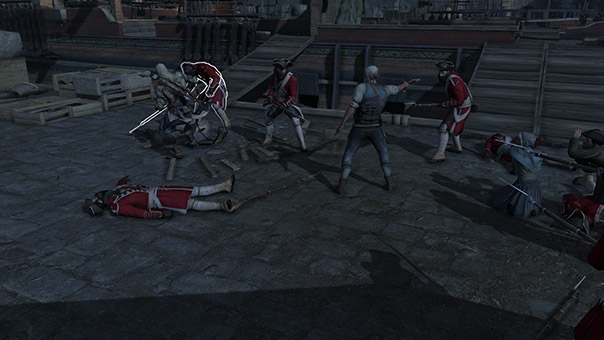 Or, well, you could use other tools at your disposal. Put a tripwire mine near the pier entrances and engage in a fight, or have the recruits deal with the guards while you intercept the running away Captain, or use Bodyguards to kill the front wharf guards, and then jump onto the ship from the pier, or start a riot, distract guards that way and go around via rooftops, or… well, get onto the ships through the rooftop I’ve mentioned before. It’s pretty noticeable if you look around, you just have to have a reason to look around to notice it. And I just love that path for some reason.

And, you know, we can have it so if the Captains are not killed (or beaten unconscious, if you’re don’t want to kill without need) and run away, then more British soldiers arrive in the second part of the mission. Or Jagers. Yes, I love Jagers, let’s have more of those. Only get rid of that weakness to disarming, so they would be total beasts. But, yes, consequence for failing the objective doesn’t really dictate your playstyle, it just makes the second part of the mission more challenging a little bit. You can say that this goes against the concept of the Animus… but, really, Animus is a simulation, and I’m pretty sure it can adapt the AI to slight inconsistencies (it does that all the time anyway).

Objective 2 – Defend the people on the boats
So, as the Sons of Liberty begin dumping the tea, the British regulars get in to stop them. We need to protect Paul Revere and William Molineux. I wonder where’s Sam Adams during this. He must be on the ships, somewhere… But I haven’t seen him (he is in the cutscenes, though). 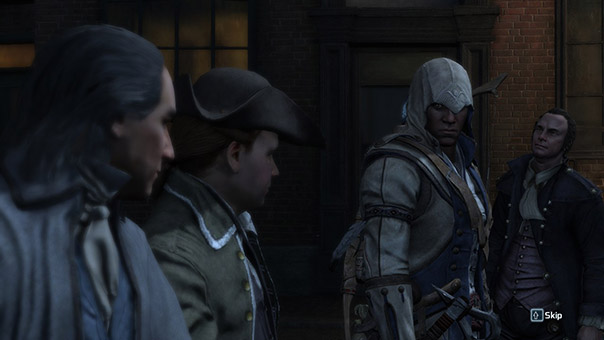 The premise of this objective is pretty simple. Paul is one ship, William is on the other, regulars are coming in waves, and you have to jump from ship to ship to help the two guys until all tea is dumped. Call recruits for backup if you want, use any tools at your disposal the way you want. I think it’s pretty cool, there’s really nothing I would change. Well, maybe I would make the waves of regulars spawn just a little bit more often. But that’s about it. Okay, I would also add the scout, grenadier and captain archetypes into the mix, because fighting just waves and waves of regulars is too easy. 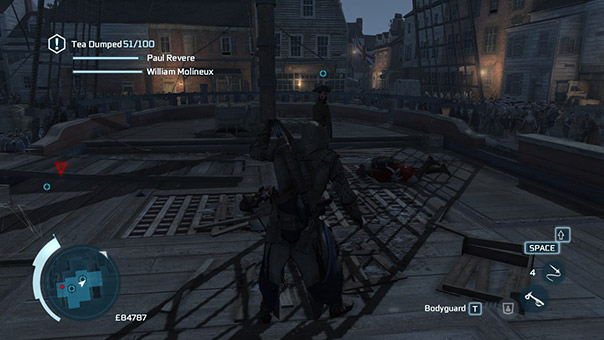 When it comes to the Full Synch objectives… This part’s got three of them. Dump 10 crates of tea into the sea. This is fine, lets you participate in the act of… tea dumping… and if you want to complete it, you have to divide your attention a little bit.

Now, the other two objectives don’t make sense at all. Air assassinate a soldier with a musket? Cut it out. Throw three soldiers into the water? Cut it out. Especially the second one, you have to actually use the move throw. If you punch them into water, that doesn’t count. It’s annoying. And no, at this moment I don’t have any appropriate alternatives, sorry. 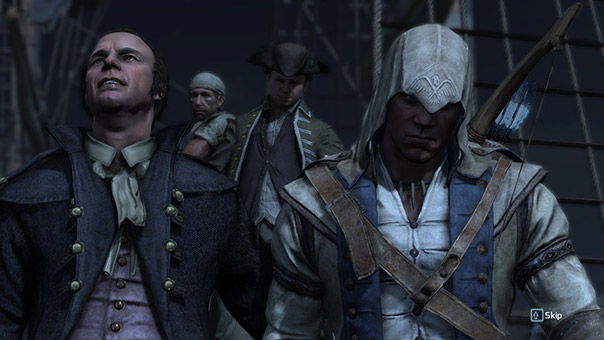 When Connor completes the mission, he is given the honor to show a metaphorical middle finger to Johnson himself, thinking that he thwarted the Templar plan and saved his people. Sadly, that’s not the case, but the cutscene is pretty cool. And this gif is cool too.

So yes, this is it for this mission. Thank you for reading, and I’ll see you next time.