Assassin’s Creed IV: Black Flag at the moment of writing this post is my most favourite game of the franchise. It’s just so well-crafted, from mission design to narrative, world, how it all connects together. And maybe it doesn’t fix all the flaws inherited from other games (like the still very easy combat system), but as I’ve mentioned a couple times before, it’s not a barrier for some amazing experience and in my opinion Black Flag delivers it. The game is really a ’Best of Assassin’s Creed’ collection, combining all the strengths of previous titles in one cohesive package. But today I want to talk about the narrative themes of the game, as well as how they connect to gameplay.

At its core Assassin’s Creed IV: Black Flag is a story about finding your place in the world. We have our pirate group of characters where each tries to figure out where and how they fit. Part of this group is the main character Edward, of course. But there’s also, for example, Stede Bonnet with his desire for adventure, Benjamin Hornigold searching for order, Blackbeard realizing this life is not for him and Bartholomew Roberts who at one point decided that his motto is ‘a merry life and a short one’. In other words, YOLO.

Then there’s the two factions, the Assassins and Templars, with their already established beliefs and conflicts. And through interaction between all the characters from these different groups, Edward finally finds out who he is and what his place in the world is. It’s a very beautiful, personal story, quite different in style from narrative of the previous titles. And to be honest it resonated with me quite a bit, possibly because I too, as Edward and many others before and after him, have spent some time trying to figure out where and how do I fit in. 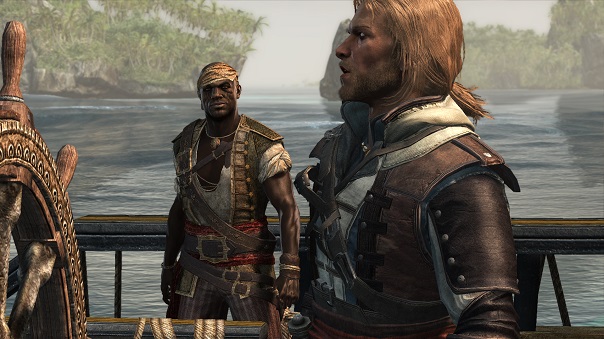 And at the core of Edward’s character arc and Hero’s Journey lies Aesop’s fable about the Eagle and the Jackdaw (hence the name of Edward’s ship), in which the jackdaw tries to lift a ram, and childs of a shepherd ask what bird is that, to which their father replies ‘This is a Jackdaw, but if you ask it would call itself an Eagle’. In the game, this is represented by Edward seeking great fortune but getting far over his head.

Ok, that’s all well and good, but how does that fit in with the sneaky-sneaky-stabby-stabby-shippy-shippy gameplay of Assassin’s Creed IV? After all, these are narrative and arcs and themes that can be applied to a number of games of different genres and playstyles and everything, but it works particularly well with Black Flag. Why? Well, the answer is – the Jackdaw, Edward’s ship and home (well, there’s also Great Inagua that for some reason tries to act as a base, but it’s kinda irrelevant, Jackdaw is Edward’s real home).

At the beginning of the game, you don’t have a ship of your own. You pilot a couple, but in restricted or linear sections, and most of the starting chapters you spend on land without the ability to leave the location you’re in whenever you want. And then at one point you’re imprisoned and sent away on a fleet convoy. 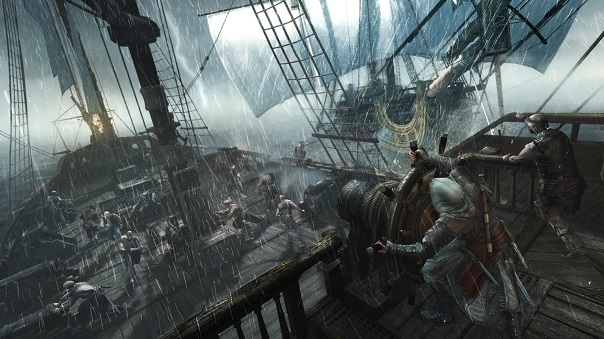 A (historical) storm rises as you escape alongside your future first mate Adewale and future crewmembers, commandeer a ship, and then in an epic setpiece get it out from the clutches of surrounding storm, hurricanes, big waves. And end of this setpiece not only marks the moment when you get the Jackdaw, but also the moment when the whole game world opens up to you (with the exception of a couple locations due to narrative restrictions, but they’re not in easily reached places at first). Getting the Jackdaw gives the feeling of freedom to Edward and to you as a player.

But even though you can go wherever you want, you can’t succeed wherever you want, as different areas of the Caribbean become progressively more difficult with more dangerous and better-equipped enemy ships, forts, and guarded locations. So, while the main narrative draws parallels between the Jackdaw/Eagle fable and Edward himself, you as a player engage in the meta-game of making your Jackdaw ship an Eagle. By completing side-activities to get money and resources to upgrade the Jackdaw and be able to go into more dangerous locations, and so on. The loop eventually climaxes with Legendary Ships, the hardest enemies in the entire game.

As you go through Black Flag, you get attached to your ship, because the game has what I call Jackdaw-based economy and structure. And by that I don’t just mean that you upgrade it and use it for sea-based activities like boarding ships, capturing forts, whale-hunting, exploring wreckages and whatnot. You can’t even do land-based activities without it, because to reach any sort of land you need the Jackdaw. So the protagonist’s and player’s goals align as Edward constantly seeks what will bring him wealth beyond imagination while you as a player seek wealth to improve the Jackdaw. 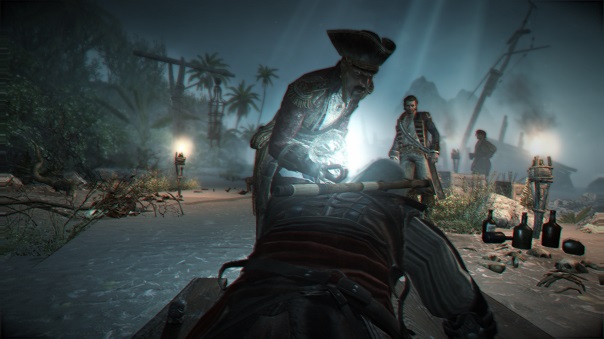 And when Edward fucks up, you feel it too. Because at those moments, the Jackdaw is taken away from you both. So no more open-world, no more go wherever you want, you’re restricted to one specific part of the map, be it an island or a town. No more freedom (in a broad sense of course, there’s still freedom inside the missions themselves, so gameplay doesn’t become linear).

So this alignment between the player and the character provides additional connection between them and adds weight to the themes of the narrative and questions asked: is it worth it, what do you do if not that, and so on.

And this may seem like something natural or evident or easy to do, but it’s not. Let’s take Assassin’s Creed: Rogue, which is a game that bases most of its systems off Black Flag. The main character, Shay Cormac, also has a ship there – Morrigan. And that ship, honestly, is nothing compared to the Jackdaw. But, not to be argumentless, let’s compare the two. 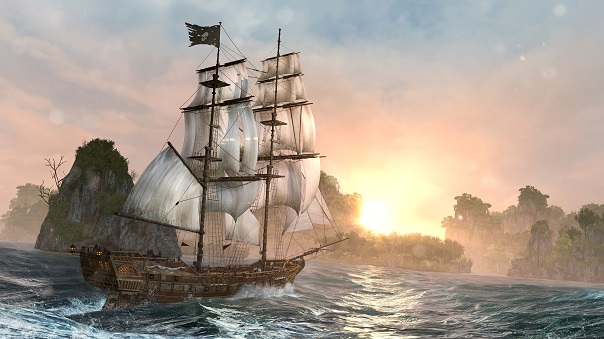 1 – How you get the ship.
Black Flag: You get the Jackdaw as you escape imprisonment and wrath of nature itself, outrunning hurricanes in a storm and surviving.
Rogue: You get Morrigan by simply clearing out enemies on a lone docked ship in a desolate location and now it’s yours.

2 – Significance of getting the ship.
Black Flag: The full open-world Caribbean becomes available to you only after you get the Jackdaw, it symbolizes freedom for the character and the player.
Rogue: You get the ship in your very first mission, so you don’t really know what it’s like without it.

3 – Reliance on the ship for navigation.
Black Flag: Without the Jackdaw, you can’t really get anywhere in the Caribbean.
Rogue: There are three big areas in Rogue. One is New York City, where you don’t need a ship at all. Another one is River Valley, where you need the ship only partially, as quite a few locations are connected through land, or through rafts. So the only location where you do need it for navigation is North Atlantic.

4 – Importance for the economy.
Black Flag: the most important income sources are sea-based, things like royal convoys with tons of money and warships with tons of resources, you need the Jackdaw to get them. Land-based activities are auxiliary, and are mostly used for the purposes of upgrading the Jackdaw.
Rogue: the most important income sources are land-based, with renovations providing a steady income of money and land outposts housing large amounts of resources. You can have a very steady and efficient economy without doing any sea-based activity (as a matter of fact, I didn’t really do anything sea-based in Rogue unless it was required by the plotline).

5 – Importance for the narrative.
Black Flag: the Jackdaw is an extension of Edward. His personal goals and the goals of the player as it concerns the Jackdaw are aligned. Edward’s character progression is based off those goals.
Rogue: Shay’s goal is to stop the Assassins from finding a Precursor Temple. Morrigan doesn’t have anything to do with that.

Now, the purposes of these comparisons is not just to criticize Rogue (even though I do believe that Morrigan is kinda pointless there), but to show how impactful properly connected narrative and gameplay can be. And there are plenty examples of games where this works particularly well. For example, Brothers: A Tale of Two Sons has such a wonderful and emotional connection between mechanics and the narrative. But the bigger the scope of a game, the harder it is to create and maintain such a connection, and I think Assassin’s Creed IV: Black Flag being an open-world game does this incredibly well.

Thank you all for reading, hope you enjoyed it. Feel free to leave any comments below. If you’d like to keep an eye on my future blog posts, feel free to follow me on Twitter
@farlander1991 🙂