← What if The Hobbit in 48 fps is the first movie you see?
Assassin’s Creed III – Public Execution →

Anybody who knows me will tell you that I love Assassin’s Creed. And that’s true. Assassin’s Creed III is no exception. I thoroughly enjoyed that game. However, that doesn’t mean I think it’s without flaws. And the biggest flaws of Assassin’s Creed III, in my opinion, lie in the direction of mission design. A lot of times it’s really restrictive, and doesn’t use the full array of Assassin’s Creed III mechanics. Don’t get me wrong, I don’t find the missions to be bad per se. I was having a blast playing them during my first playthrough. But replaying them, due to their more linear nature all across the board… was less enjoyable. So I decided to start a little series, analyzing different missions from Assassin’s Creed III and how I think they could be improved. The first one is Mission 4 of Sequence 7 – Battle of Bunker Hill (yeah, I’m not going to do this in chronological order). Possible spoilers, just in case.

Objective 1 – Mount the Horse
So there’s this Patriot, who’s escorting us to Israel Putnam. If we get too far away from him, we desynchronize and restart the level. And the soldier doesn’t move if we’re not on a horse. Now, here’s a question… Why even have this? 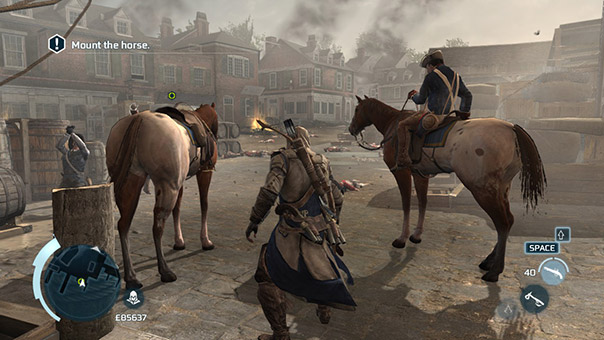 Wouldn’t it be easier to just have the objective as ‘Get to Israel Putnam?’ No need to add the path to the patriot, no need to restrict the player from free-roaming in burning Charlestown. If you’re worried about him getting onto the battlefield, well… Assassin’s Creed is known for using desynchronization walls (you desynchronize and have to restart if you go too far past them), so… Just block the battlefield (which is going to be unlocked anyway after you talk to Putnam). Just place a marker on the map for Putnam’s location, and that’s it.

After we get to Putnam, we find out that our target, John Pitcairn, is on the hill across the battlefield in the British encampment.

Objective 2 – Cross the Battlefield
Ah… This objective… Here’s the thing about Assassin’s Creed CGI trailers. They’re usually fairly representative of what you are going to be able to do in the game. With a few liberties there and there to look more cinematic, but overall – fairly accurate. So when players saw in the Assassin’s Creed III CGI trailer that Connor rides on a horse through the battlefield and then gets to his target right through the ranks of the enemy army… they expected it would be a possibility. Except it isn’t.

Alright, well, you can get your horse on the battlefield. Although it’s not by design, it’s a bug. There is an invisible wall between the encampment and the battlefield if you’re on a horse, one you can pass if you just try hard enough.

But getting to your target through enemy army – no. If you manage to get to the enemy ranks alive (which actually is not that hard with a horse, by the way), there’s an instant kill trigger right infront of them. So you die no matter what.

And, really, why would you block half of the map with the desynchronization walls? Here’s the available area to the player (we can’t go anywhere beyond the red lines). 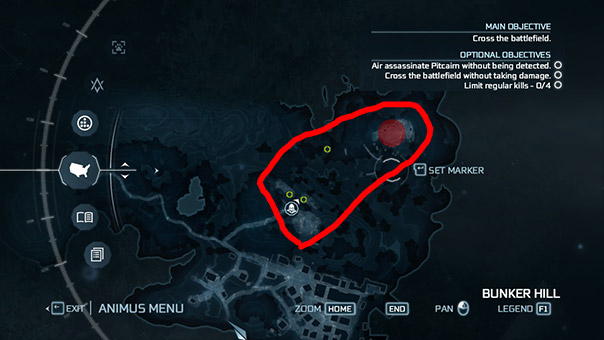 Really, the only way to complete this objective, is to run through the battlefield, hiding behind cover when the British army fires, into the woods a little bit to the left of the enemy army.

If the player wants to go around through water, why not give him that possibility? It’s slow, but, why not? If the player wants to get across the battlefield and then not go behind the enemy lines, but through them, why not give this possibility? I think it would be better if instead of the ‘instakill trigger’ in front of the British rank there would be a trigger that transforms a number of them into normal enemies. If he manages to get through them – that’s awesome. If he dies (which is most likely going to be the case), he dies. Everything’s permitted. That’s the Creed, isn’t it?

Full Synchronization Requirement – Cross the battlefield without taking damage
Ah, full synchronization requirements… I agree with the idea of optional challenge objectives, but I don’t like it when they set restrictions to your style or what you want to do. This does not really relate to this requirement in particular, so… more about that in a bit. What do I think about this full sync requirement? It’s alright, requires paying attention. However, the reason I think this one shouldn’t be in the mission in the first place is because…

Objective 3 – Reach the Top of the Cliff
This goal has to be the objective #2. Reach Pitcairn’s encampment. That’s it. How you do it is your decision.

Objective 4 – Assassinate John Pitcairn
Pitcairn’s camp is actually well designed. There are four approaches that I’ve noticed. There’s a stealth path that leads to trees and allows for an air assassination, there’s a path through the middle of the camp right through enemy ranks that allows for a running assassination (this one was actually shown in a few trailers), there’s a path through tall grass, a few haystacks and tents, and finally, a stealth path that goes a little bit around the encampment and allows to get to Pitcairn from behind. And also, of course, you can just start an open brawl if you want. This is a really well designed area, and I don’t think it needs any improvements, except…

Full Synchronization Requirement – Air assassinate Pitcairn without being detected
This is what I meant about full sync objectives being restrictive. Obviously, you can ignore it. But still, subconsciously, out of all possible paths to get to Pitcairn, this optional objective nudges you to take the air assassination one. I think the requirement should’ve been ‘Assassinate Pitcairn without being detected’.

You can ask, well, what about those who want to start an open fight? Well, though luck, you’ll have to fail the objective, because Assassins don’t reveal themselves before they strike. As long as optional objectives align with the Creed, I’m fine with that. Although, I would modify the detection from being ‘detected by anybody’ to ‘detected by Pitcairn’. That way, if the player’s good enough, he can take the running assassination path right through the middle of the camp and kill Pitcairn before he knows what hit him.

Full Synchronization Requirement – Limit regular kills to 4
Kill no more than 4 soldiers… I agree with this requirement, really. After all, it’s by the Creed to not slay the innocent or when unnecessary. Although, it’s very weird that this requirement comes up only when you get to the camp, there are a few patrols before that, and you can kill as many people as you want… So, what I would do, is raise this number to 10 or 12, and assign the objective straight after the talk with Putnam.

But, you know, now that I think about it, Full Synchronization Requirements shouldn’t really have ANYTHING to do with the precise way you complete the main objective. They should be more like side-objectives. Like, for example, pick up and get wounded patriots on the battlefield behind cover. That’s not related to the way you assassinate Pitcairn, doesn’t restrict your playstyle in any way, provides additional challenge (since the British army is constantly barraging the battlefield with fire) and it’s totally something Connor as a character would do. Just an additional small objective. That’s the way Full Synchronization requirements should work. I will think about Full Synch objectives that way next time I do a level analysis.

Objective 5 – Get back to Putnam
After we assassinate Pitcairn, there’s the traditional ‘white room’ conversation between the Assassin and his target, and then… a cutscene. Yeah, we don’t actually run away from the camp, that part is skipped. Which is a shame. Running away was an essential part of the assassination process in previous Assassin’s Creed games.

Imagine, the British army at this point does not stand in a ranked formation, but is all over the battlefield fighting with the Bluecoats. And fighting can be spread out not just in the battlefield itself, but to some other more secluded parts on the side as well. And we have to get through that hell back to the camp. And deal or run away from the not so happy soldiers in the camp. Possibly set like 10 Jagers (the best and most elite enemy archetype in Assassin’s Creed III) to chase us. It would’ve been cool.

I’ll be honest, I enjoyed this mission the way it is in Assassin’s Creed III when I first played it. But now that I think about it… I would like a version closer to mine much more. And, really, my proposal is mostly about less restrictions. Which you as a level designer have to spend time scripting in anyway, so why do that if they’re not as necessary and without them it’s more fun for everybody? Why not put in Objective #5 instead? :p

← What if The Hobbit in 48 fps is the first movie you see?
Assassin’s Creed III – Public Execution →