Continuing the thoughts about Assassin’s Creed III levels. This time, it’s Mission 3 of Sequence 8 – Public Execution. Once again, spoilers in this post.

So, in this mission we have to kill Thomas Hickey, who framed us for the plot to murder George Washington, and are to be executed thanks to our dear friend Charles Lee. Now, this mission is very short and extremely linear. But the whole situation has a lot of potential. It can be a good place for several mechanics that are underused in Assassin’s Creed III. Mainly – the Eagle Vision, Recruits, and having to fight with somebody else’s weapon (or remain unarmed).

The mission starts with Connor being escorted to the gallows. There’s only one path, we can move only forward, but, honestly, I don’t have anything against this particular moment. It’s atmospheric, creates tension, and it’s pretty cool seeing our Assassin Recruits taking care of guards on rooftops (what happens, I wonder, if we didn’t get any recruits before this mission?). 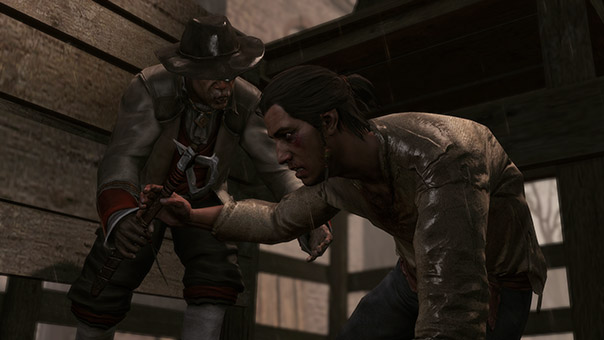 However, when we call upon the Assassins to cut the rope and free us, that’s when the disappointing part begins. Basically, Achilles gives Connor his tomahawk back, and we have to kill Hickey before he kills Washington. And it all happens in slow-motion. And then the mission’s done. One straight line, we’ve got only like 10 seconds, so… Yeah. You can prolong this if you engage a fight with Hickey but don’t actually assassinate him, getting into a traditional combat. But, that’s the extend of possibilities in this mission.

Here’s what I propose. In the cutscene after the Recruits cut down the ropes, Achilles does not approach with the tomahawk. So we don’t have a weapon. Connor runs and intercepts Hickey, yelling to Washington to get to a safe spot. Hickey pushes away Connor and runs into the crowd. This can possibly be a playable section, but I think it would flow better if it’s just one cutscene rather than cutscene followed by 10 seconds of gameplay and then switched back to a cutscene.

Now, imagine the situation. The whole square is in chaos, people are just running everywhere (there has to be more people on the square, and most likely they have to have some sort of ‘running path laps’ around buildings to keep the chaotic feel). Your goal is to assassinate Hickey before Washington dies. Washington with his bodyguards every minute or so move from one spot to another. Hickey stays in the general vicinity of Washington, but does not approach him. Instead, he’s moving with the scared shitless crowd, and it’s his mercenaries who try to kill future president. So, we have to use Eagle Vision to keep track of where the hell Hickey is. And he doesn’t try to fight Connor. He wants to live another day, if possible, so he runs if sees you. Oh, he doesn’t have a marker over his head, I know Assassin’s Creed III likes to do this sometimes with its targets. No markers.

But Washington’s bodyguards kind of suck, they’re not really strong. So without additional help, George’s going to die by the hand of the mercenaries. But it’s going to be really challenging for Connor to be in two places at the same time (but in realms of possibility, if the player wants to try do this all on his own). This is where the Recruits come in. Maybe add a few quick accesses to the rooftops so the player could get into a tactical position and just use the recruits, if he wants to. There should be a possibility to kill Hickey with the recruits. The guy is the only main target we get to assassinate in a city (Haytham doesn’t count as it’s more of a boss fight with him), and recruits can only be used in cities… So, yes, there should be at least one main target we can use our recruits on.

Oh, and Connor doesn’t have any supplies at all on him. So all weapons and tools have to be taken away from enemies, or looted from their bodies. Now, honestly, I think that looting and stealing are two mechanics that fully contradict Connor’s character. I would just remove those two mechanics altogether to blend better the character with gameplay. But then again, it’s the Animus, and just because the player loots every possible dead body or kills thousands of people doesn’t mean that Connor actually did it. 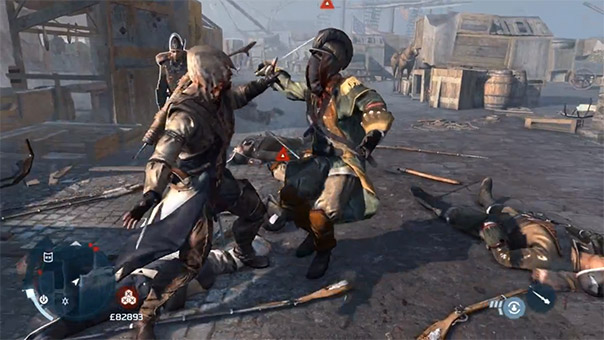 Now, to increase the tension of the situation a little bit, every now and again we can set out a Jager to catch Connor. Yes, I love Jagers. I think they are awesome enemies, and you see them only if you get to Level 3 Notoriety, which is fairly disappointing. And, after all, most colonials think that Connor’s responsible for the plot to murder Washington, so it’s not like they know what the hell is going on.

So, yes, my suggestions do not include a lot of stealth. But I think the situation is interesting enough that we can overlook that part, after all, not every mission has to have a stealth approach. But, I think the most important part, is that the player is provided with the situation, and a goal, and it’s up to him how he tackles it using the tools and actions available.

After the assassination, our goal would be to become anonymous. We don’t have to protect Washington anymore, but there are lots of angry Bluecoats after us. So, we become anonymous, then get an objective to find Washington. We find Putnam instead. He clears our name, and, basically, the final cutscene the way it is now in the game happens. And that cutscene would actually make more sense this way, because Washington suddenly leaving in the minute when Connor talks to Hickey during his final moments is weird.

When it comes to Full Synchronization requirements… I’m not sure. In previous post I said that Full Synchs are better off as a side-objective that doesn’t influence how you approach the main goal. However, the only thing that I can think of is ‘Don’t kill a single bluecoat’. Unarmed knockouts are fine. It doesn’t exactly influence how you reach the main objective, since our target is Hickey and his mercenaries. Bluecoats are just an additional obstacle, and this challenge would make the obstacle a little bit trickier.

No optional objectives like ‘Don’t let Washington get below 50% health’ or something like that. I hate those things. And the set-up that I’m proposing may make the objective even more frustrating.

So, yes, this is it. Sorry that this post is a little less structured than my last one. But, I guess, a chaotic mission deserves a chaotic blog post! 🙂