So, the new Tomb Raider is out. In this new reboot, Crystal Dynamics has set out to create an origin story which shows us a realistic depiction of Lara’s transformation from a naïve and afraid college student to a courageous badass from the previous iterations (the Hero’s Journey, pretty much). Due to some statements that were made in development, this has led to quite a few controversies, but I’m not going to touch upon this. The real question is: did Crystal Dynamics succeed in their endeavor with Lara’s character? And my answer to it is, well… Kinda. For the most part.

Don’t get me wrong; the new Tomb Raider is an amazing game (with a beautiful soundtrack, by the way). And this is coming from a person who never really was a big fan of Tomb Raider series in the first place. However, there is a problem with the segregation of story and gameplay, which makes it a little hard to get into Lara’s character development in the first few steps.

Lara’s supposed to start out as an inexperienced adventurer who has to overcome her fear, but at first this is pretty much present only in the cutscenes. Because due to core gameplay mechanics, she is very capable at acrobatics, shooting and melee fighting from the get go. There is a small RPG side-system that makes her even more capable (and, later on, deadly), but still, gameplay wise Lara can kick some ass from the beginning (I guess since we’re controlling her). And this leads to some cognitive dissonance.

For example, Lara’s traumatized by her first human kill with a pistol (which is also supposedly the first time she holds a gun in her hand, at least as far as I understand), but that kill happens in a Quick-Time Event. Then we get into traditional gameplay and have several enemy encounters… during which, Lara has got no problems or remorse with shooting other human beings in the head (very professionally handling the weapon, I might add). Okay, if the player is not skillful, then there are no headshots, but, still. It just… doesn’t gel well with the character progression, really. Of course, this was lampshaded a bit with a conversation between Lara and her mentor, Roth. Roth says it mustn’t have been easy to take several lives, and Lara states she’s scared how easy it was.

Of course, eventually Lara’s state of mind and character development merge with the core gameplay mechanics, and it’s a smooth sail from there. I’m not sure when exactly the merging happens, I didn’t actually notice it. But I can say that there’s a moment when Lara’s really pissed off at the enemy survivors to the point where they actually get afraid of her and run away, that’s the moment when you definitely feel like the story and gameplay have finally fully synched up.

But still, what about the beginning section? How to properly convey character’s inexperience and fear in gameplay? There are games like Gothic and Deus Ex. In Gothic the first time you hold a sword, you wield it clumsily like a club, and after training in your fighting skills – you actually become a good swordfighter. Then there’s the first Deus Ex which actually hindered your aiming somewhat if you were inexperienced with a certain weapon.

But those are RPGs, and Tomb Raider is a traditional action adventure game, the core mechanics have to stay the same. You don’t want the game hindering the player’s aiming skills, for example. So what to do? The answer lies, I think, in another third-person action game, Spec Ops: The Line. Not going into much detail here, but in Spec Ops the main character is a soldier who goes through… quite a few traumatizing events which change him as a person. This is also represented in his animation. The game has three animation sets for the characters which switch in accordance to their moral state. For example, the execution moves, at the beginning they’re very professional (just shoot and end the pain), while in the last animation sets they’re brutal (like punching in the face to death). And even though the core gameplay hasn’t changed, we see how the events of the game have affected the main character. 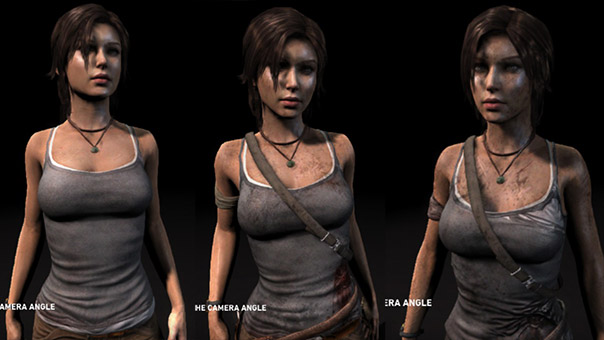 This could also be done in Tomb Raider, I think. Lara already has three different skins as the game progresses. So, what about different animations? Have her flinch in the first animation set every time she kills an animal (or almost every time). Have her firing the pistol animation be very hectic and imprecise (even though it wouldn’t really affect the gameplay, really), like she’s firing randomly just to survive (and in this case, even if the player’s good at headshots, it would look more like an accident than deliberate, precise and remorseless aiming from Lara’s part). And eventually this will transform into the professional-looking gun holding stance. The animation quality itself in Tomb Raider is already very good, and I feel that with some additional animation sets like in Spec Ops: The Line, the first steps of Lara’s character transformation would look much more believable. Even without any change in level design and what happens in the game.

After all, in games, we can’t resort just to the way other mediums deal with stories. We have to use everything to its full potential, including gameplay, game mechanics, level design, and, well, character animation. And Tomb Raider does a lot of that, actually. Which is why overall the narrative design is pretty well-crafted there, I think. For what it is, of course. Some may find problems with over-the-top moments and the fact that there are some things no human being could possibly survive… but I’m willing to suspend by disbelief for that. And yeah, there are some plot ‘twists’ in the game that can be seen a mile away, but it’s not taking away from the overall enjoyment. Besides, the topic of this post is just Lara’s character and progression.

And in that regard, other than the hiccups of the first act due to difference between story and gameplay, which, honestly, does leave somewhat of a lasting sour taste in this regard, I think Crystal Dynamics has done a very good job with Lara. You do feel the transformation, and the weapon/skill upgrade system also complements it really well. Tomb Raider is a great game, and if you haven’t checked it out, you really should.