Evil Islands is a Russian tactical RPG released way back in the year 2000. … Well, gee, I feel old now. As I’ve written in my last post, it has inspired my venture into the Game Design territory, and I want to talk a little bit more about it.

If you don’t mind, I’ll just copy my general opinion of the game from the previous post. “It was beautiful, had amazing story, amazing gameplay, amazing writing and voice acting (well, the last part applies to the original Russian version), amazing fan community.”

I love the game. I’ve analyzed it so much from every possible side, what works, what could work better, what doesn’t work at all, why things in it are the way they are. And you know, and this is probably the main reason of writing this post, Evil Islands has got a few of features which are relatively unique even to this day. 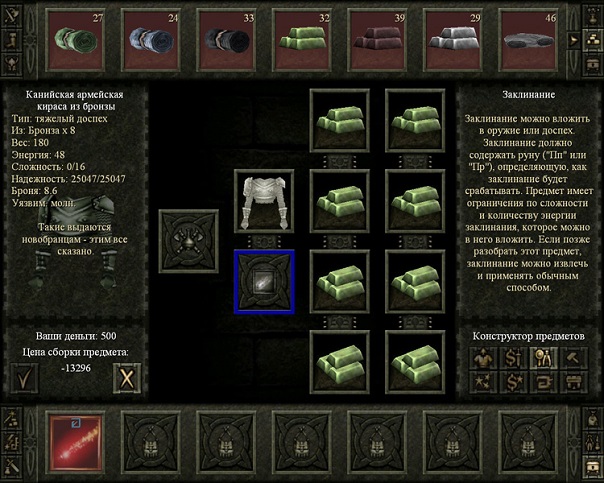 The Item constructor. Every weapon, armor, spell has a blueprint. For weapons and armor, you combine blueprints with materials to create the actual item (its stats depend on the material you use). For spells – blueprints are combined with runes which change the properties of a spell. You may also put a spell you created into an item. The system has still ways it can be fleshed out, but I prefer it to a lot of crafting systems used in games today. Usually it’s either a ‘this strict recipe for this item’ or ‘here’s a fixed item which you can upgrade with a few stones or runes’. For the most part at least. Evil Islands construction system, on the other hand, is very versatile, and with a lot of potential. Plus it allows for a great number and combination of items without actually going into a ‘loot overdrive’ (something I don’t like in a lot of RPG games).

There’s also the target system in combat. Not a lot of RPG games (heck, even tactical games) use something like this today. Each body part has its own health bar. So for example, you can break an enemy’s arm, and his attacks are going to be much slower. Break a leg – and he won’t be able to run. Strikes to the head are critical hits. At the same time, the chances to hit a particular part are lesser than if attacking just the torso., It’s a pretty simple targeting system concept which opens up a lot of strategic possibilities in battles.

One thing I wondered, why is it Evil Islands in particular that has inspired me to go into game development? I’ve played a lot of games that I loved, including Rage of Mages 1 and 2 (they were made by the same Evil Islands developer and take place in the same game world). Why is that the game that has sealed my dreams? Not Populous, or Settlers, or Quest for Glory, or Monkey Island, or tons of others amazing games that I would fanatically play? And I guess there are two main reasons for that.

One is that Evil Islands was my first more or less in-depth view behind the curtain of game development. There was an article by the game’s writer about a playtest session (which showed the significant differences between the final game and a version mid-development) that I’m planning to put up on the blog in a translated variant – it was my first sneak peek of the things that were going out there. There were a few other development-related articles about Evil Islands there and there that have eventually inspired me to search for information about game development in general.

The other reason was the community. Sadly, Evil Islands community is not exactly active nowadays. Still, back then it was incredibly friendly, passionate, and with a lot of people who wanted to create something for the game. ‘Oh, you want to make a game mod for Evil Islands? I want to make a game mod too! Let’s do it!’ And when you start creating something for a community rather than just dabbling in some editors by yourself for your own amusement, it’s a very different feeling and experience.

Can’t say that I have played Evil Islands often lately. The last time I even launched it was… I guess around two years ago? Sounds about right. Regardless, Evil Islands for me is not just a game that I loved to play. It was important. Still is. And one day, after I gain a much more considerable amount of game design experience and ‘street cred’, I will get to work on its spiritual successor.