The 5 Extra Coins in Hearthstone

Hearthstone is probably my second most-played game ever, the first one being Evil Islands which I was playing for about 8 years straight, so it’s hard to beat that, but Hearthstone – I did some calculations, and I probably have spent somewhere 600-700 hours in it so far during the past two years. At the least. So, naturally, I would like to talk about it. 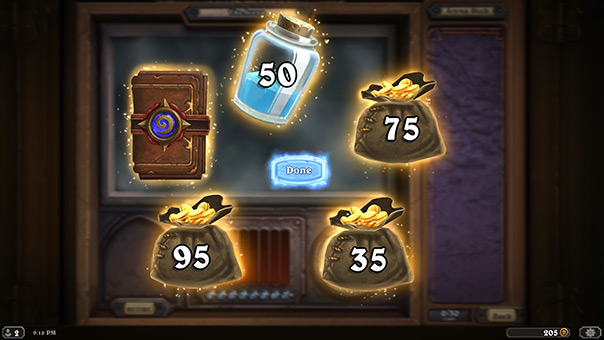 The topic, though, is something you usually don’t hear when Hearthstone is discussed. Heck, I don’t even know how much of a planned design decision that was, and at least half of the player base wouldn’t feel the effect. But I still find this interesting and worth discussing.

Well, based on my perception of things and some discussions with other Hearthstone frequent Arena players, this little deviation from the norm has a bunch of interesting effects related to Arena and outside of it.

2. When you have those 5 extra coins, – and by the way, as the first Arena run is free you’re almost guaranteed to have them, – you’re inclined to play just a bit more. Let’s say you have 95 coins. You’re so close to buying a pack you want, might as well play a couple times in ranked to get extra coins. When you have 90 coins, even though nothing has changed, you still have to play those couple games and you’ll get a pack, the goal doesn’t feel as close and therefore you might be less motivated to get it.

3. It doesn’t feel like a manipulation attempt, due to the localized use of the reward (just in Arena) and the fact that it actually doesn’t hinder any progression, just helps a bit when you play Arena regularly.

Of course, one can always look at this from another angle. That instead of adding 5 coins, they’re actually removing those. That you could’ve had 100 coins, but because of Arena you have 95. And I think that’s also a valid viewpoint. Which is why this particular topic is so fascinating to me.

There’s really no proper indication in the way it’s designed to prove one way or another, it could work both ways. If you have any thoughts or insight on the matter, feel free to leave it in the comment section. See you next time!