I was so hooked on Rayman Legends the past couple weeks. You know those games that you’ve tried for a bit and know are really good but didn’t play extensively for some reason? Rayman Origins and Legends are some of those games in my case. And not long ago I played Legends for a bit longer and couldn’t let it go. It’s simply stunning. So well-designed, well-tuned, insanely creative and very engaging to play and the whole package is like, woah! And the music levels. Can’t talk about Rayman Legends without mentioning those. They’re amazing. But in this particular post, we’re gonna take a look at how Rayman Legends handles secret areas. It doesn’t take much to mess up with these kinds of things and make the process of finding them really arbitrary or annoying, but Rayman Legends does everything right.

In Legends, outside of completing the levels, you have a goal to save all the captured teensies. In every level there are either 10 or 3 of them, and in total there’s 700. And I would say that at least half of them are located in secret areas. That’s a lot of teensies and hidden locations. So how does the game make the process of finding them enjoyable and not frustrating? Well, there are three components: level design, audio and UI.

Let’s start with level design. Rayman Legends smartly places its secret areas and provides just enough hints to show that something’s there, but it also does something incredibly important – the game in the first couple levels teaches you the general principles about hidden locations which prepares you to the process of finding them in the rest of the game.

From the very beginning, very first cutscene, in fact. There’s a dragon flying around the area as monsters beat up and capture teensies, and at the end of the cutscene, shortly before gameplay begins, the dragon demonstratively flies by an area with a caged teensie. 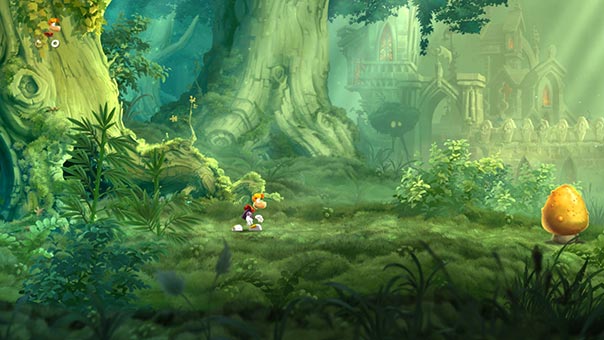 We start the game right next to that secret area, with the pathway to that teensie being slightly hidden behind some plants. So, lesson #1 the game teaches from the get go: there are hidden locations and secret pathways leading to them.

Later on (and as a note, for the purposes of this article I’ll skip any teensies that are on the levels’ main path), we see some plants in a tunnel. The game was teaching us to smash them to collect lums, so the player’s first instinct is to go in and hit them. 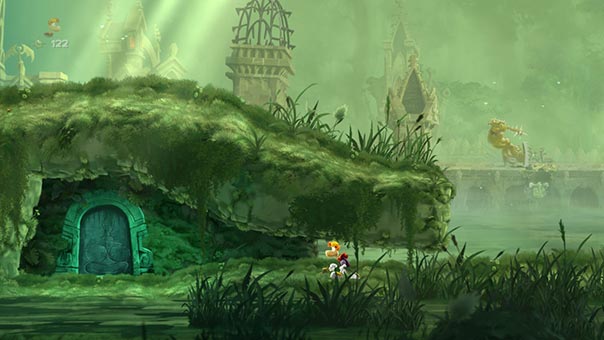 As he does, it is revealed that the tunnel actually leads to a secret area. Lesson #2: there are terrain elements that will disappear, revealing something behind them, when we get close enough. 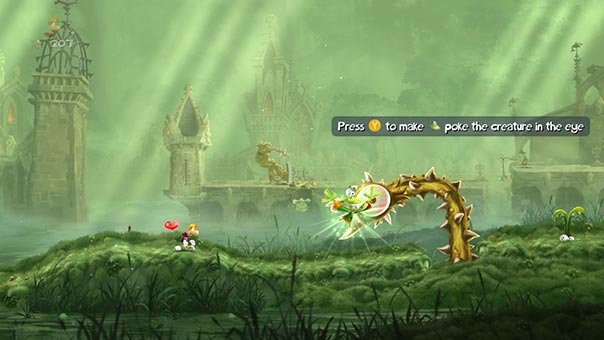 Here, notice how we see a huge enemy on the background, guarding a cage with lums? The enemy is animated which draws attention to him.

When we get to that location via a nearby mushroom jumppad, the enemy and the cage are out of sight, to the left. Lesson #3: explore and don’t always follow the main pathway.

At a later point, there’s a cave with a rock in the foreground that stands out a bit. The main path shown by lums clearly doesn’t lead to that location, but we can still access it freely and there’s even a moving platform that will help us do so. If player’s curiosity isn’t caught just by the fact that the area area seems specifically created for something (and by audio hints that I’m going to talk about in a bit), there’s an enemy who jumps out near that foreground rock as we land to the right of the chasm, luring us to jump over. 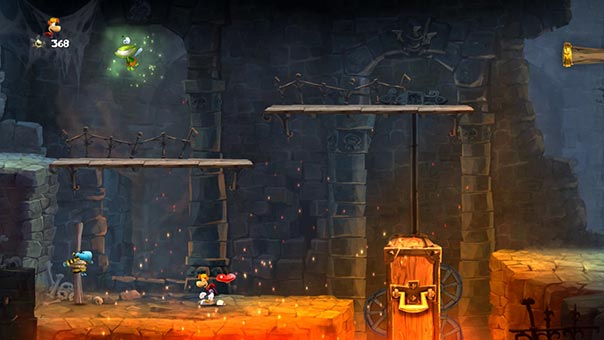 The player kills the enemy, getting close enough to that rock, and lo and behold, there’s a teensie there! Lesson #4 – foreground objects can have something behind them.

In this location, there’s no particular secret (the door to the captured king teensie is not hidden), but the placement of the enemy is such that it leads the player off the main path, showing that sometimes there are branches that lead to different places. 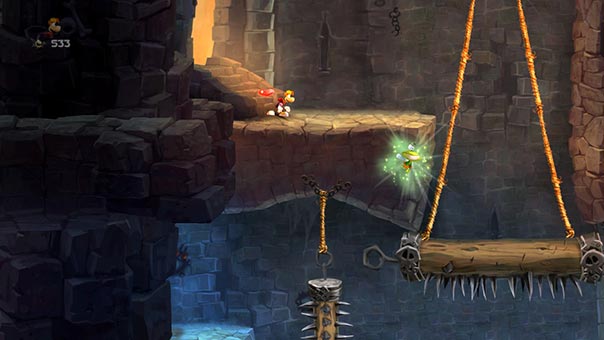 Here we can see another type of hint – lighting, and a bug that crawls around the wall. The foreground element doesn’t look too out of place this time as it’s connected to a persistent one that’s always on the screen. 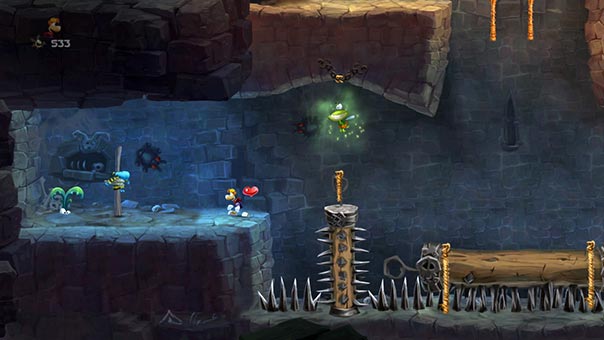 However, this way the player is taught to mind his surroundings, looking for different clues and hints.

And here I would also like to mention another thing the game teaches (not just in this particular location). There are turnips that we’re encouraged to take out for lums. Sometimes, however, the turnips are revealed to be something else, in this case – an enemy. So the player knows that turnips are not the only thing he can find in the ground. Later on we find teensies as well. 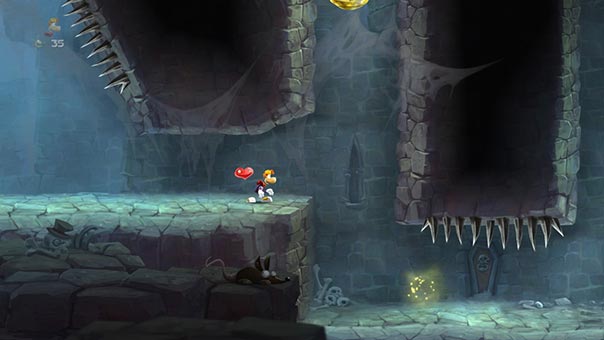 In the second level, there’s a walljumping path upwards that one might think doesn’t lead anywhere, because when we move, the camera doesn’t go higher than a certain threshold. However, you can see there’s a flying cage of lums flying just on the edge of our view. When we walljump high enough, the camera zooms out revealing there’s more to the level. So there’s another lesson – sometimes secrets are blocked by camera thresholds, so if you think something looks like a pathway that leads to somewhere, perhaps it is. 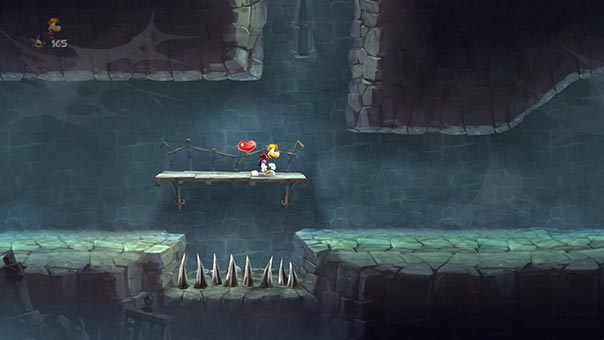 Later on there’s a place with exactly the same situation, but this time without any visual hints. However, as the player now knows such situations are possible, he naturally will try to go up to see if something’s there. 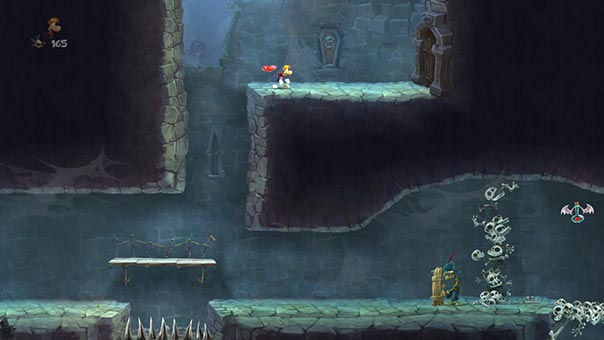 And indeed there is a secret room. 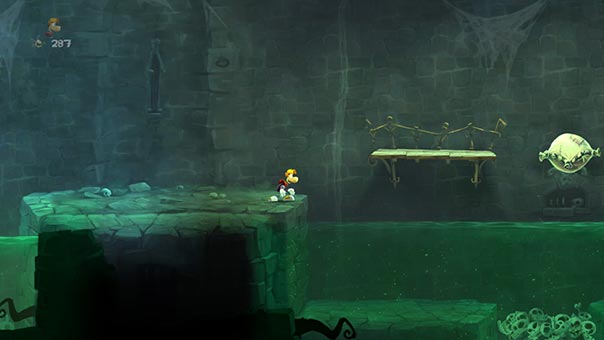 And the last type of lesson in the first two levels are breakable objects located on edges of the screen. 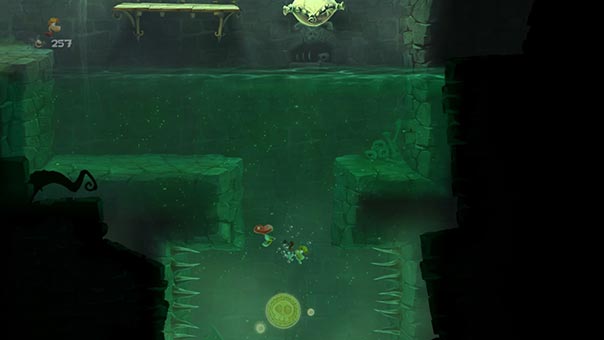 If player goes there, he then discovers a secret location.

Here the learning part about secret locations gets to an end. What comes after are areas used to secure the knowledge, like this one, where we see a branching path with a breakable object near what seems like a wall. 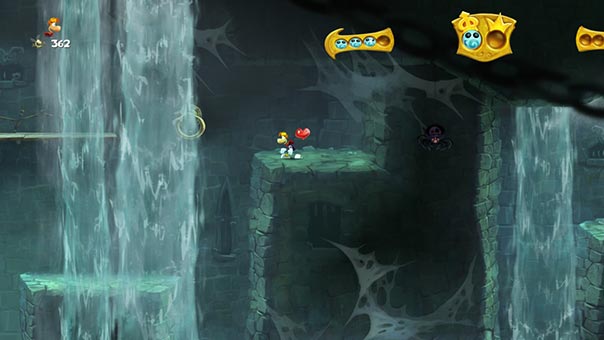 But there’s also platforms that are absolutely not necessary for that particular secret, they must have a purpose, correct? 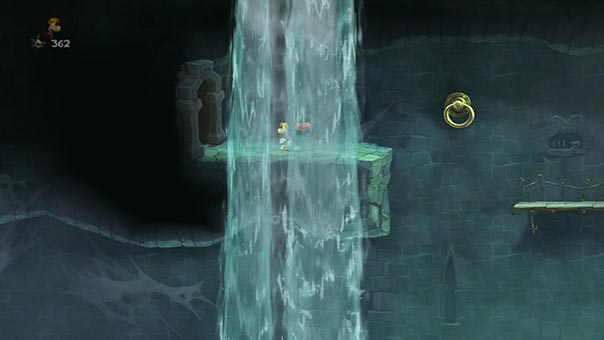 Correct. They they lead to another secret room.

From here on now, the player knows the basics of finding secret areas, so as he progresses through the game and they become increasingly trickier to find, it’s not frustrating as there was a learning curve to this, not to mention the player keeps getting better and better at it.

There’s also audio hints. Whenever we’re not far from a captured teensie or a secret room with one, we hear cries for help. Alternatively, we hear grunts of a monster who is beating up a teensie. This way, the players knows that he must search for one of them nearby. On a side note, there’s a very satisfying ‘Ooooooooooh’ sound whenever you locate a secret area.

But what I think is the most important part of the whole ‘finding 700 teensies’ process is how it is represented in the UI.

The counting of found teensies is not numerical, but graphical. So there’s an icon for every teensie, and it’s based on the location of the teensie in the level. I.e. the first teensie in the level has spot #1, the second one has spot #2, etc. A little exception are the queen and king teensies, you can see on the screenshot that they’re always in the center, but there’s also a pattern – the secret room with the queen is always the first, the secret room with the king is always the second.

The reason why it’s so vital is that you instantly know when, and most importantly approximately where, you’ve missed something. Imagine in every level we wouldn’t have had the UI element from the screenshot and the way icons appear on it, but just numbers. You found 9/10 teensies. Getting that last one would’ve been insane, as there’s the whole level to search for, they could be anywhere, and if you have several levels with missed teensies? But if you know you’ve found teensie #2 and #4 then you approximately know where you need to search for teensie #3, and that makes the completion process much more enjoyable.

It’s also helpful in the middle of the levels as well, where if you see that you’ve missed something, you can backtrack and find the teensie you’ve missed. Naturally, this works only when the levels are backtrackable (which is most of the time in Legends’ case).

And this is basically how Rayman Legends makes the experience of finding all the hundreds of teensies very smooth and enjoyable. When I started playing Legends and saw that there’s 700 teensies, I thought to myself, ‘that’s so many, I probably am never going to get all of them’, because I’m used to how in other games with this number of collectables it can take just too much time and I usually don’t bother.

But now I have found every one of them. Thanks to secrets design, it didn’t feel like a chore at any point. Of course, it also helps that the game itself is awesome and the levels are so great 😀 There are though a couple exceptions to the quality of secrets design, in the ‘Back to Origins’ part of the game.

This may have something to do with the fact that the levels included are redesigned to fit certain Legends mechanics/goals (like freeing 10 teensies in a level, for example), I’m not sure yet what are the changes from Origins. Need to play the original game itself to do a proper comparison. 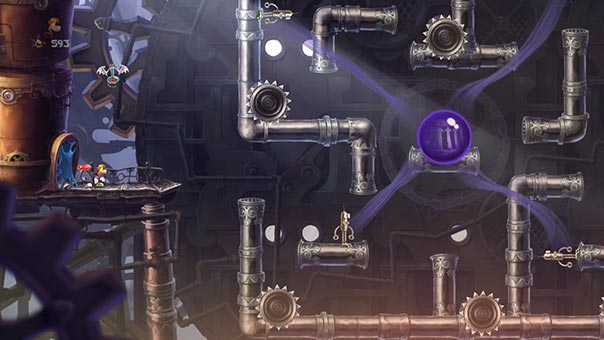 But in ‘Back to Origins’ levels there are several teensie locations that to me just don’t make sense, because they go against the principles taught over the course of the game. The most recent example I can think of is the ‘Mecha No Mistake’ level close to the end of ‘Back to Origins’ campaign. Now, the levels in Origins are divided into sections, and the last section (from which you never can backtrack, by the way, which can be really frustrating when you’ve missed something) always has the last teensie to free. Except the ‘Mecha No Mistake’ level, where there’s TWO teensies, with one being way off beyond the edge of the screen.

Now, this is actually frustrating, because for about 35 levels, you know that when you get to the location with a caged teensie protected by a shield, that’s the last teensie, so you don’t expect there to be another one at any point. But there is, and just in this one particular instance, and you think you’ve missed something and replay the level because you want to complete it with all teensies from the first try… but you actually didn’t miss anything.

Those gripes aside, though, the game as a whole handles secrets wonderfully, and that makes you want to get all those “collectibles”. Thank you all for your time. If you have any comments, feel free to leave them below. If you’d like to follow updates on my blog, feel free to follow me on Twitter
@farlander1991 🙂