Creating and filling open worlds is a tricky thing. On one hand, you want them to be massive, expansive, provide a feeling that you have a whole sandbox to play in, and incentivize exploration. On the other hand, you also don’t want them to feel like there’s nothing to do, you want there to be content. Pretty much every open world game (that is not an RPG, I suppose) tries to mitigate this issue by adding a bunch of collectibles spread all over the world. That’s content that, if the player chooses to complete it, will have them explore every part of the map. But, to be honest, I consider most collectibles to be filler with very little value. What’s much more important is how the world is utilized in missions or other meaty actual content. And a game that I think is a very good example of open world usage in missions is Assassin’s Creed II.

What I find very cool about the open world in Assassin’s Creed II (which in this sense continues the open world principles of the first game), is that the world opens up step by step, right up until the very late stages of the game. It’s very different from lots of open-world games of today (including the Assassin’s Creed installments that came after), where usually at first the player is limited to a small gaming space for the introduction period and then the whole world opens up to him. Not that there’s anything wrong with that approach, of course, but there are certain advantages to the way Assassin’s Creed II deals with world space.

There are two big cities in the game, each with several districts, and three small cities, each essentially being one district that encompasses the whole area. Each Sequence of the game opens up a new district, which would be the main focus of the story missions. The side missions, in turn, would be also used to fill in ‘gaps’ in the used space. In the end what happens is, if you just go through the main story, then you would visit a very considerable amount of the open-world. If you also do the side missions, then you would explore almost all of the map. All while doing content that matters instead of the sole purpose of collecting things.

To better visualize the usage of open-world throughout the main and side missions of the game, I’ve created sort of mission design heatmaps (click on them to enlarge). The legend for all the maps is pretty simple:

Green – Area that the player will pretty much 100% visit and explore because the mission design revolves around it (be it an infiltration sandbox area, search area, a particular path of a character we need to follow, etc.)
Yellow – The uncertainty space, areas that the player might visit during the mission, mostly relates to when we need to go from point A to point B (so it encompasses all the different routes), or escape guards after an assassination, etc. Basically, the brighter the yellow is, the more likely it is players will explore that part of the map during missions.

NOTE: The maps do NOT have anything related to collectibles or open-world exploration on your own pace, strictly just missions.

Venice
I’ll start with Venice. If you have read my previous posts related to Assassin’s Creed II, you might know that I have a bunch of problems with the part of the game that takes place in it. Narrative pacing comes to a halt, Sequence 9 (Carnevale) doesn’t make sense and Sequence 10 (Arsenale) is boring and redundant, among other issues. All that said, it doesn’t affect the main topic: which is how the space is utilized in missions. In that regard, I think Venice is a perfect example to start with. Please note, that Sequence 8 is also the one where we utilize the flying machine, which is why half of the city is covered in probability space, but the focus of the sequence is the San Marco District in the center. 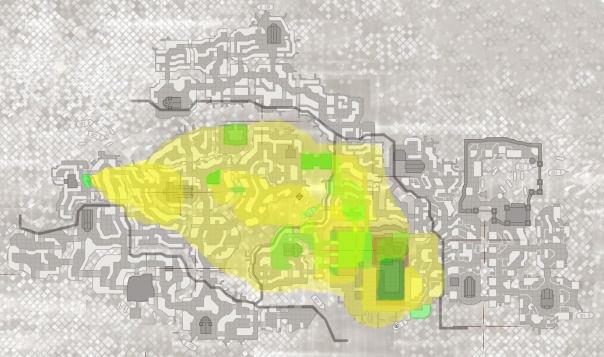 Florence
Florence is a bit of an interesting beast for several reasons.
– Only the first sequence takes full advantage of the district it’s in (that big green spot, by the way, is the Auditore home).
– Sequences 2 and 4 utilize only half of the districts they unlock, with the rest revolving around your home district.
– Sequence 13, on the other hand, fills up the space left in those sequences.
– You revisit Florence throughout the main story in Sequence 5 & 6 as well just to meet and talk with Lorenzo di Medici and/or Leonardo da Vinci.
– Oltrarno District doesn’t have any side missions at all as it was unlocked later as DLC.
– You can notice that the edges of the city are generally speaking avoided in missions, I personally think this is to create a feeling that the space is bigger than it actually is.
Despite all those curiosities, when all is said is done, the result is still similar – by the time you get to the end of the story, you’ll explore most of the space the game provides. 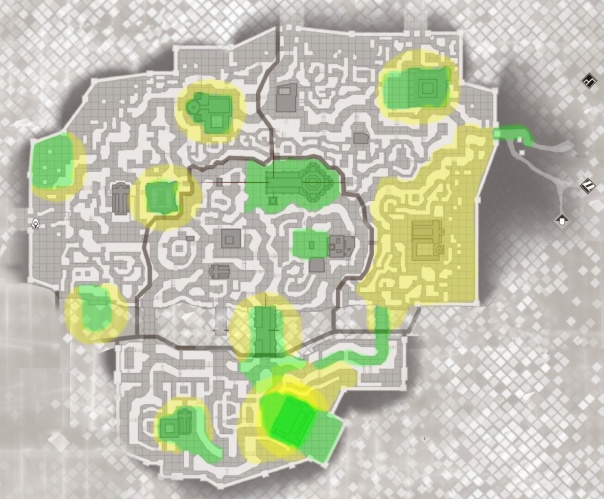 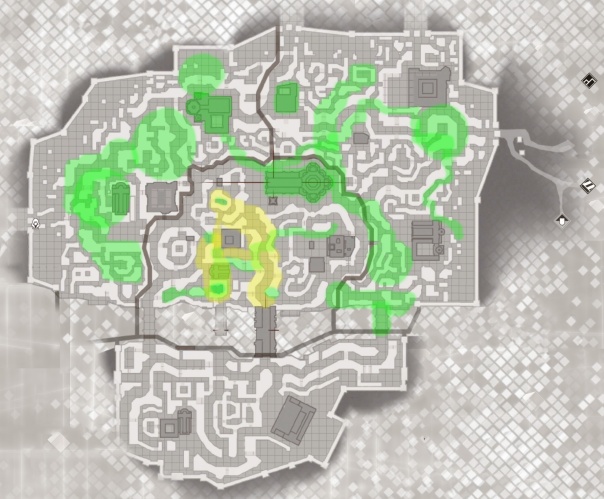 San Gimignano
In the main story, San Gimignano is utilized in one Sequence 3 mission and pretty much the whole of Sequence 5. What I find curious is that the game manages to utilize most of the expansive countryside, yet there’s a whole chunk on the west of the small city that’s not used at all in missions. It’s weird, as there are locations that are shared between main and side missions, and if we’d, for example, move some assassination contracts to that area it would fix the issue. 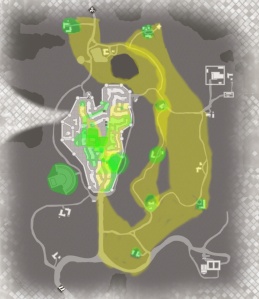 Forli
Like San Gimignano, Forli is visited once during Sequence 6, but fully utilized in the main story only in Sequence 12. Which is a DLC sequence, so unless you have the DLC or play on PC version which has it included by default, Forli would be extremely underutilized.

Monteriggioni
While Monteriggioni’s main sequence is 3, we visit the town a bunch of times during the main story. Mostly to talk to somebody in the Villa. That said, there’s the whole city restoration loop that goes on the side that makes you incredibly familiarized with the town, so while maybe main missions use mostly the central street and Villa Auditore, and there’s only one side mission in the whole game, the place still feels like home, and you learn its every nook and cranny. I especially love how the town drastically changes visually as you continue with the improvements, it’s really satisfying.

So this was a breakdown of how open world space is utilized in Assassin’s Creed II. While the game has its own share of collectibles, like 100 feathers and several hundred chests, you don’t have to search for them to experience most of the world that the game developers have prepared for you. Everything was set up in such a way that main and side missions will show you almost everything.

Now, of course this kind of approach doesn’t suit every game, and it’s not the only correct approach, but I find this kind of structure to the open world utilization pretty nice, and also not as intimidating as the traditional open worlds. Sometimes it feels like too much opens up at once, and exploration feels daunting – this isn’t the case with Assassin’s Creed II.