I firmly believe that what we as game developers do is create experiences for our players. And all the different areas of the game, – cool gameplay, technology, narrative, audio – feeds into those experiences. How the wooshing sound of Hearthstone cards when you move them helps with that feeling of a physical card game. How the different sound cues of Left 4 Dead depending on the special zombie nearby influence the teamwork aspect of the game. How controls themselves are used as a narrative tool in Brothers: A Tale of Two Sons. And a game is valued best when it all works as a whole.

There are many different ways we can craft wholesome experiences, it all depends on a game by game basis. Hearthstone does this by adding lots of details – all the little animations in the UI to create a feeling that it’s a physical box, the screen shaking and crowd cheering when you attack an enemy with a very powerful minion, the ‘Job’s Done’ sound from Warcraft 2 when you can’t do anything that turn, the sparkles on your spell cards when they’re affected by spell damage bonuses. But Hearthstone is a game that is of a relatively small scale, not in a sense that developers don’t have a lot of things to do (they do), but that it essentially revolves around that card game box we see when the game opens.

On the opposite part of the spectrum are massive open-world games like Grand Theft Auto, Assassin’s Creed, Saints Row, or a bunch of MMORPGs, where there’s big sprawling areas, lots of activities, lots of things to do. You can’t possible fill every little thing with details like Hearthstone does. And the activities can range from chasing chickens to saving hostages to robbing banks to yoga. It’s very easy to have things feel disjointed and incoherent, and there are many open-world games that do. However, I would like to talk about an example of successful and cohesive open-world experience, – Assassin’s Creed: Brotherhood.

Now, one of the reasons I chose Brotherhood for this post, is because the game if you examine it closely has quite a bit of what I consider to be flaws, across many different areas of the game. But, as I discussed in one of my previous posts (Creating Great Experience with Flawed Mechanics), I believe that flaws aren’t a barrier for an amazing, engaging, solid and wholesome game, and Assassin’s Creed: Brotherhood is a very good example of this.

If we look at different Brotherhood parts separately, there’s quite a few things that can be criticized, some of which include:

– The main storyline is ‘alright’ at best (especially when comparing to the story of the first game), with barely to none character progression for Ezio, a villain that was set up as something more than he turned out to be, and a fairly black & white good vs. evil standard plotline.
– The combat is still broken and doesn’t make use of most of its features. The first Assassin’s Creed had one dominant strategy: counter-attacks. The sequel didn’t do anything with it, even made it worse with an even more advanced counter-disarm and making counter-attack windows more lenient. And Brotherhood has added kill streaks on top of all that, which is another dominant move. To its credit, though, it feels very fluid and badass.
– A lot of overpowered new elements that make existing ones redundant. The new crossbow, for example, has all advantages of both throwing knives (silence, high ammo number) and hidden gun (range, possibility to one-hit kill any enemy) with none of the disadvantages.
– The Brotherhood mechanic is ultimate power. Even with cooldowns, the only real thing preventing from utilizing it every minute to complete every mission are the optional objectives for 100% synchronization.

All that said, I would still call Brotherhood a great game. Because a game is a sum of its parts, and as a whole, Brotherhood provides a very clear, engaging and cohesive experience for the player.

The game does it is by centering most of its activities around one core goal: take down the Borgia rule and bring Renaissance to Rome. I want to note right off the bat that it’s not the only way to build a compelling experience, but this is how Brotherhood in particular does it. 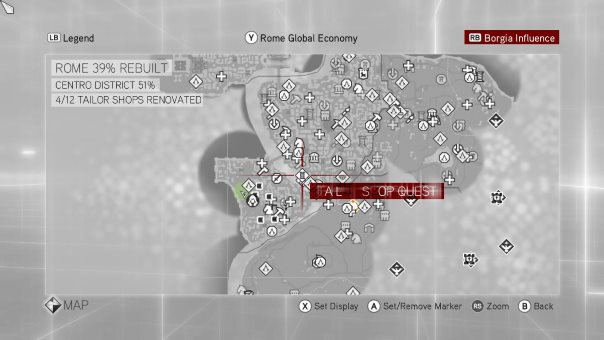 Let’s look at all the types of content that Brotherhood provides:

– Main missions. Centered around freeing Rome from the Borgia and killing Cesare.
– Borgia Towers. Liberate districts from the oppressive Borgia captains. Destroying towers allows to buy shops and landmarks in the district.
– Economy. Rebuild shops and get money from them to renovate Rome.
– Courtesan missions. Most of them are additive to the main story, having you weaken the infrastructure of your main targets.
– Thief missions. Revolve around a feud with the Cento Occhi, a rival thief gang paid off by the Borgia (they might randomly attack you in the open world as well).
– Assassination missions. Revolve around eliminating different Borgia supporters.
– Lair of Romulus levels. They are like Tombs from Assassin’s Creed II, rewarding you with an armor set when you complete all of them. However, unlike Assassin’s Creed II Tombs, they are all connected together by a subplot in which you uncover the connection between the fearsome Romulus sect, that terrorizes the population, and the Church.
– War Machines. Leonardo da Vinci sends you to destroy the inventions he was forced to do for the Borgia.
– Templar Agents. Essentially more advanced Assassination missions where you have to kill Templars (who, on a side note, are also multiplayer characters).
– The main collectibles are Borgia flags that you remove from the city.
– The Brotherhood mechanic has you recruit oppressed civilians over the city, as you send them on missions to different parts of the world to train and help you fight against the Templars and their rulership over Rome.
– And as a side-note, the Animus wrapper fixes the eternal open-world question, ‘why does this person goes chasing chickens when he needs to save the world?’ We’re viewing ancestor memories in different succession, so for example just because Ezio went to race with thieves before going to save Caterina Sforza, doesn’t mean he actually did it in that order.

As you can see, pretty much every activity is related in some ways to taking the Borgia and liberating Rome. Of course there are a few things that deviate from that. Like Ezio’s repressed memories of his relationship with Cristina, that unlock at different game completion thresholds, or collecting some feathers in honor of Ezio’s dead brothers. Or chests that are just there. Lots and lots of chests.

The point is, with such focus on a single goal, there’s always purpose to what you do. Compare it even to Assassin’s Creed II, where you deliver letters for random citizens and beat-up cheating husbands because… well, because that’s just what the missions are. 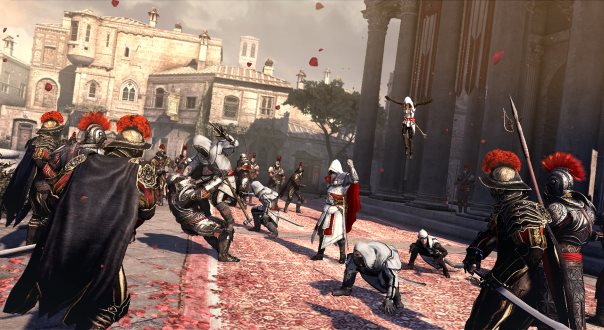 One of my most vivid memories from playing Assassin’s Creed: Brotherhood for the first time was infiltrating Castel Sant’Angelo close to the end of the game. As I was climbing the castle I was commanding my brothers to take down Borgia guards on the walls surrounding it before they’d notice me. It felt great. All the flaws, – like overpowered mechanics, quite a few of averagely designed side missions, etc. – I didn’t care about those, as I was participating in what was a culmination of everything I did in the game, how I liberated Rome and trained up my Brotherhood and now we go in Mission Impossible-style to finish off the oppressive rulership.

Which is why I believe a cohesive experience that the game provides is the most important aspect, because, ultimately, that’s what stays with you over time. Of course, things like top-notch mechanics, amazing narrative, great balance all help with that, but even if they have issues, you can get a great game. And it could go the opposite way too. You can have the best combat mechanics in the universe, the best story there ever was, the best level design one has seen, but if it all for some reason doesn’t gel together, for an exaggerated example let’s say we have a game with amazing melee combat but mostly stealth-based, but very well-done, levels and a compelling story that’s about collecting a bunch of animals, then it doesn’t matter because the lasting impression for the player would be that of confusion and uncertainty.

And yes, not every kind of experience is for everybody. People who enjoy games like Europa Universalis might not be the same people who enjoy Uncharted. But it’s still important to have it defined and the game built around it in the way you deem best, so to capture the audience that would be interested in the experience your game provides. And don’t add cool and awesome things just for the sake of them being cool and awesome.

Thank you all for reading. Feel free to leave any comments below. If you’d like to keep an eye on my future blog posts, feel free to follow me on Twitter
@farlander1991 🙂