Whenever we as designers play games, we always look at them from analytical standpoint. What works? What doesn’t? Why? And of course, ‘What I would have changed to make it better?’ This is a very important exercise that keeps our brain always ticking and trying to improve oneself. That said, there is one big flaw with that last question – a lot of times it’s not something we can put to practice mid-development. During analysis, we have the advantage of calm environment and knowing the final result, something that’s absent when developing a game. It’s messy, there’s a whole lot the team needs to do, and there are times when they absolutely know how to improve certain parts of the game, but can’t. Time restrictions, priorities, other issues. So what exercise would help to prepare for that? Well, a much less perfectionist question: ‘How to make a great experience with problematic parts?’

Because games are about the whole experience, how everything gels and works together, not about each part on its own being perfect (while that certainly would be great, that’s pretty much almost never the case). If we take, for example, the crafting mechanic from The Last of Us and solely examine just that… we can see that it’s not a particularly great crafting mechanic. It’s basic, functional, but nothing interesting. But it doesn’t have to be anything more than it is, as in the overall experience of the game it serves its purpose.

The game that inspired me to explore this perspective on game analysis is Prince of Persia: The Sands of Time, so it will be the topic of this post. You know that moment when you look at your Steam games library with almost 500 games, at least half of them unplayed, try to make a decision which game to choose, and wind up replaying something you’ve played before? I had that moment as I decided to replay Prince of Persia. And I must say, time has been both kind and unkind towards the game.

First things first, even though the game has been made 13 years ago, no less, and can’t compete with the visuals and gorgeous environments of today, it’s still very nice to look at, which shows just how important the visual style is even when graphical fidelity is not up to par anymore. And the acrobatic traversal in those environments still feels great and smooth. Running on walls while avoiding traps and timing your jumps, swinging off poles, rolling under blades, it’s so engaging that you can’t help but want to proceed further through the game and the simple yet incredibly charming narrative.

And then we get to combat sections which make you want to say ‘to hell with this game’ and leave. Oh the combat. In retrospective, I think I tolerated it back in 2003 because I knew no better. It’s… dull, for the lack of better word. And frustrating. Enemies can be basically divided in two types: those you can vault over and knock over and kill, and those you can’t, which you knock with a wall rebound strike and then kill. Now there’s actually more moves you can perform and the enemies have more nuance, but those two moves are the only ones you really need to know – they’re a dominant strategy.

Each combat section sends our way waves and waves and waves of enemies. In the beginning it’s just enemies of the first type that, as the game progresses, gradually changes to more and more enemies of the second type. And you never really know just how many of them there will be until the battle is over. Then there’s critters like scarabs and birds, the latter deserving a special place in hell, especially in the section where you need to climb and perfectly time your strikes or else they make you fall to your death.

There’s also a special mega attack, which makes all enemies freeze and killed in one hit as you teleport from one to another. It doesn’t work properly half the time either because the camera angle doesn’t recognize that there’s an enemy in the direction you point, or the enemy is not within some vague range, both cases make you lose precious time of that limited mode. Speaking of camera in combat, it deserves a place in hell alongside birds. It can be frustrating in acrobatic sections as well, but not nearly as much as during combat. 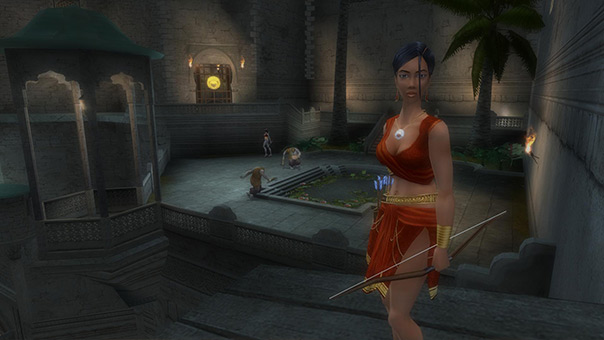 And Farah. Farah doesn’t deserve a place in hell. All the time, that is. Just during combat situations. It would’ve been really nice if she, being an archer and all that, would try to at least move around the area instead of standing, watching and only sometimes shooting at enemies that approach her point blank range. The elevator section near the end of the game has brought back a bunch of repressed memories of me trying to beat that part…

Now what combat sections have going for them is some kick-ass music. But it’s not enough to make the fighting experience actually enjoyable.

As you can see, I think the whole combat experience is really problematic. As do a lot of other players. The first instinct for me is to try and analyze what needs to be done for the combat to be improved – how to make sure there’d be no dominant strategies and you’d have to fight different enemies in a bunch of different and interesting ways, what needs to be added to the combat AI of both enemies and Farah, all this kind of stuff. However, all these are expensive changes. Would that improve the game? Certainly. Would that be feasible during the development? Most likely not.

So let’s say we can’t change the core of the problem. Dominant tactics, faulty AI, enemy types, all that has to stay the same. What can we do with combat to make the player’s overall experience better without resorting to expensive changes?

Well, the first issue with Sands of Time is the gameplay pacing. Aside from some moments with critters like birds, bats and scarabs, there is a rigid structure: acrobatic section (sometimes with save points in the middle) followed by a combat arena where a save point is created when all enemies are dead. Rinse and repeat. There’s no variety, which makes the whole loop boring after some time.

So the solution to that would be to simply cut broadly speaking half of the combat arenas, and have enemies spread in a bunch of different manners over the environment. Have them teleport out of nowhere at some points to create a feeling of suspense, that you can’t feel safe at any point while the Sands of Time are out of the hourglass. There would be less rigid distinction between sections, and the player wouldn’t have enough time to recognize any particular pattern. Plus as the combat against one or two enemies isn’t something hard, it wouldn’t make players fail a lot.

When it comes to combat arenas that are left, there are several things that are needed to be done:

1. Enemy Variety. Usually in combat arenas there’s two types of enemies repeating over and over, rarely three. More than that, the game a lot of times uses the same enemy types a bunch of times in a row. There are about 10 enemy types in the game, that’s enough to create many different combinations of enemies that are used in combat arenas. Even if we don’t take care of the dominant tactics, at least the player will have to vary them up more often. Visual variety is always nice as well.

2. Visibility of waves. There is sort of a system where a save slot (which is a small vortex of sand) gets more prominent as you kill more enemies in the arena, but it’s not a good representation of the amount of enemies there are left. The player never knows if in a combat arena there’s 10 enemies or 35. He doesn’t need to know the exact amount of enemies of course, but it would be good to have a better understanding of how much more there is left to the combat arena than the vague save vortex creation. Combat actually gets somewhat frustrating when you don’t know how long it will last, and whenever you think that maybe THIS is the last wave, more enemies appear.

There are many ways in which this could be done. The first thing that comes to mind is to use sand as an indicator. Let’s say the save point vortex is created out of bunch small flying sand vortexes spread around the arena. Each representing a wave of 4 enemies, for example. This way the player can get an idea how many enemies he still has to face, and the anticipation of the end will keep his interest in the fight.

3. Strategic locations for Farah. This is actually used in some combat scenarios, but most of the time Farah just stands in some spot where she can be assaulted from four sides. And because she never moves unless it’s a scripted movement, protecting her can be a very cumbersome task. It doesn’t help that your sword can actually hit her as well, so you need to spend time positioning yourself properly against enemies that are near her, which once again can be very frustrating as you can still hit her, and also sometimes attack the wrong enemy.

However, Farah can take care of herself pretty well if against one, in some cases two, enemies. She can still die, but it’s not rage-inducing as there’s plenty of time to help. So each combat arena then should have strategic locations for Farah where she can’t get attacked from behind, but can get attacked by one or two enemies. Some sort of steps broken midway, slope close to a wall, etc. Would be perfect if she took more height advantages as well, i.e. climb some boxes or something. So as the solution can’t be AI improvement, we need to make the AI issues less noticeable.

This would be enough to make the experience smoother I think. Those changes are much less expensive, there’s no need to remake mechanics, to drastically change levels, and things like that. The goal is to make the player not notice the problems. The engagement and enjoyment factor is always 100% at first, it lowers when player starts to get frustrated at the issues, but if we don’t even give him a chance to notice those issues… then the factor is still at 100%.

In the end, both questions, ‘what to change to make it better?’ and ‘how to build a great experience out of problematic pieces?’ are useful. But I think the second one is often overlooked when analyzing games, but it’s very important. In practice there are many situations when we’re tasked to make something great out of something that we’d like to be better, but don’t have time or resources to make it so. In those situations it’s important to try and find different creative solutions, and it’s good to have some practice that would help find the crux of the issue and how to make it invisible to the player.

And at the end, I just want to note that while I do use such phrases as game components ’deserving place in hell’, hopefully it’s clear that it’s all in good spirit as Sands of Time is a great game. But those birds though. And bats. And camera. Ahem… Thank you all for reading, hope you found this interesting and useful. If you have any comments, feel free to leave them in the comment section. See you next time!