The Risk/Reward Loop of The Swindle

If you’re interested in learning about risk/reward mechanics and how they affect player psychology, you should definitely check out The Swindle. It’s a procedurally generated heist game and is pretty much fully based on risk/reward loops. In this post I’m going to explore why The Swindle is so good at this.

Reward
Let’s start with the main goal. Get money. This is pretty straightforward, you’re a thief, you want money, you try to get as much of it as possible in each level. You receive the money into your account only if you get out of the heist alive, though.

This poses a question. Why would you want to put yourself in danger to get more heavily guarded money? After all, if you get caught and killed, you’ll lose the rest of the haul and continue with a newly generated character, so isn’t it better to just not put yourself at risk? 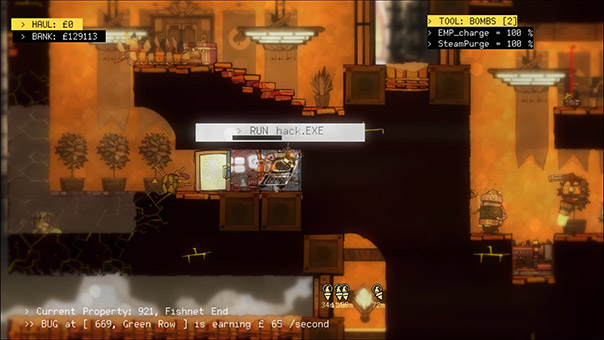 Time Limit – 100 days
The Swindle handles this question by introducing a time limit – 100 days. It’s not real-time countdown. In the context of the game, 1 heist = 1 day, and you can complete a heist for as long as you like. But in 100 days, a special security system will be activated that will prevent any heists from occurring, ever, and you lose. And you need lots of money to gain security access to the location of that device to steal and destroy it.

Now there’s a reason to put yourself in danger to maximize profits. Because if you don’t – you’ll lose. And a lot of times you start thinking, is going after that bag of money or bank computer worth it? Should you take the risk now and reap the rewards and feel good about yourself, or you’re afraid that the deadly spike and guards are located in such a position that you can’t deal with them? And I want you to note again that dying doesn’t make you lose the game, a new character gets generated but the remaining time doesn’t reset.

And this is just the basics of the risk/reward loop, The Swindle does several more things to maximize player’s greediness. 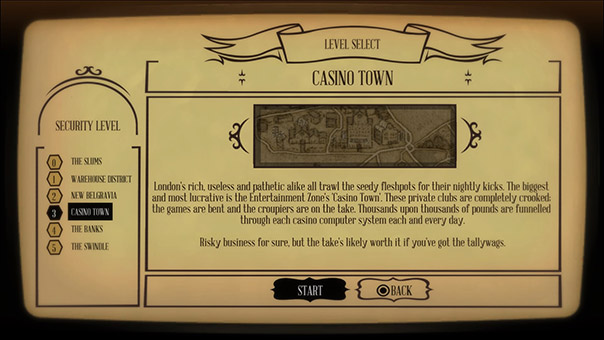 Different Zones
First, outside of the main goal zone with the mega device, there’s five other locations where you can go to. Each is more challenging than the preceding one, but also provides bigger rewards. But the catch is – you also need to gather money to unlock security access to those zones. Not as much as for the final one, but still.

Now you don’t want to gather up money like a turtle in the easiest zone, because you’ll never gather enough in 100 days that way. So you start stealing enough to get new security accesses, and then going into more challenging locations to get more money. So, with this situation in mind, you now have to spend even more money than you had to before to get even more money and that’s why you’d like to put yourself at risk to maximize the amount of monetary potential you can achieve.

The cool thing about zones is that with each day, every zone gets a little bit more challenging as well, with new additional traps and obstacles that weren’t present there before (but, to be fair, rewards are also slightly increasing alongside the difficulty). Your default skills aren’t enough to deal with that. Which leads us to… 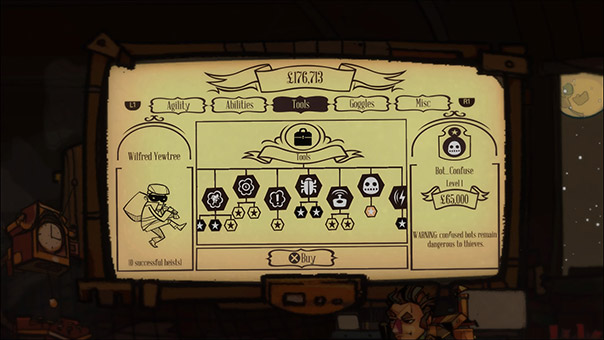 Upgrades
There are many upgrades that you can buy to increase your efficiency (and also provide reward bonuses). And you don’t have to worry about losing them, since upgrades persist between characters.

The catch? They cost money. So now not only do you want to get as much money as possible to be able to complete the game, even more money to gain access to places that will increase the rewards that you can get, but also you want even more of those wonderful dollars to get upgrades that will make it easier for you to get money and die less (therefore making sure that you don’t lose anything). But this is not all. There’s also… 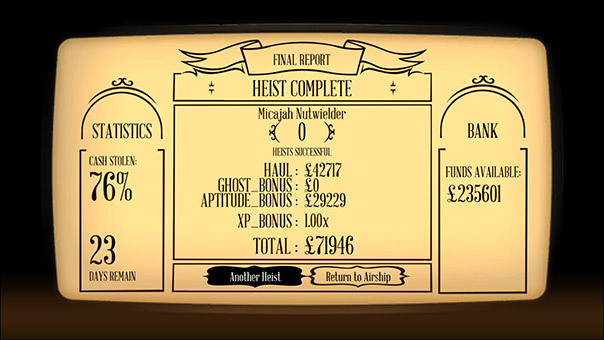 Bonuses
The Swindle also provides plenty of opportunities for bonus money. Of course, it’s hard to resist a bonus, who doesn’t like additional rewards? So outside of the main haul that you take from the heist, you get money also for the following things:

– Aptitude bonus. It’s based on an upgrade that gives you more money for hacking.
– XP bonus. Every time you steal at least 80% of the cash in the level, your character gets an XP bonus modifier, which increases the final amount of cash you get after completing the level (the modifier gets reset with each new character).
– Ghost Bonus that you get for taking all the money from the level without raising an alarm.

So basically the game says, look, you can get even more rewards than there are in the level… but you need to put yourself at risk to do so. And as the 100 days countdown gets closer and closer to 0 and you know you need more money… this perspective to take risky actions to get bigger rewards looks nicer and nicer. 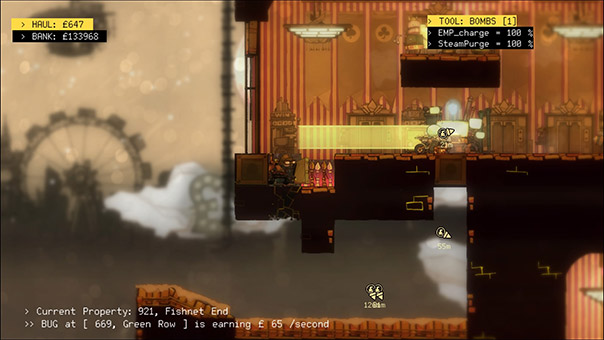 One-Hit Death
One last thing that really rounds up the whole risk/reward loop of The Swindle is one-hit death. Your character dies on one hit. There’s no way around that. There’s a bunch of upgrades but none increase your health. If you take a risk and don’t succeed… you die.

And at first, this doesn’t seem like a big deal. In the beginning of the game, which to be fair is more of a learning period, you don’t really care that much about dying. But when you start talking not hundreds but thousands or even tens of thousands of cash… well… it’s a different matter entirely. Risks get bigger… but so do the rewards and the feeling of achievement. 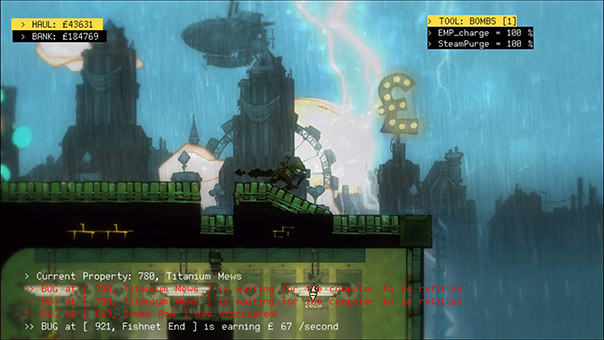 So this is what The Swindle does to make the player greedier and wanting to take more risks. And this loop can create some very memorable moments in the game. Even I, knowing all this, sometimes can’t resist going for that one last computer to hack… before accidentally jumping into a mine.

Thank you all for reading. Feel free to leave any comments below. If you’d like to keep an eye on my future blog posts, feel free to follow me on Twitter @farlander1991 🙂