Azkend 2 and Match-3 Games on Consoles

Recently in a new PS+ free games update I saw a game that I didn’t know anything about, called Azkend 2. As it turns out, it’s a match-3 game (with a mix of hidden object to it), and I’ve got to say… if we want the match-3 genre to become popular on consoles, as it is on PCs and mobile, we need to fully rethink and repurpose match-3 mechanics there.

I’ve worked on match-3 games for almost 2 years, so I hope I’ve learned enough to say that the most important part of any game of the genre, and why it’s so popular, is that it just feels good to play. And I’m not talking about animations and effects and chain reaction mechanics, although it certainly is a part of enjoyment (and of course good level design plays a huge part as well). I’m talking about how it feels good just to do the basic actions of the game. Sluggish controls are the main reason I disliked Azkend 2, no amount of effects or pretty graphics or level design quality would have saved that, and I have a feeling that had I played it on a tablet or PC (the game is released on both), I’d have more enjoyment out of the game.

So what is it about the controls that makes match-3 games feel good in a way that console can’t directly replicate?

What they all have in common is that they’re very physical. It feels very natural to flick with a mouse, or a laptop’s touchpad, or with a finger on a phone/tablet. And if one needs to create lines, it’s all done in one smooth motion, because the act of pressing and moving is easily combined in all those types of controls.

This feeling is absolutely lost when you need to move the cursor with the left stick, while pressing X to draw a line, like Azkend 2 does it. It’s not swift, it’s not physical, it’s easy to accidentally go over a wrong tile, and when you do so it takes longer to move the cursor back to the position to deselect it because of the slow speed. 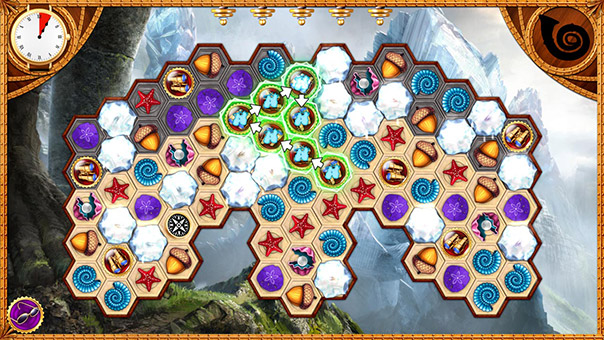 2 – Quick acting upon your decision
In match-3 games it often happens that you make a match on one side of the playing field, and then see a useful match on the opposite side – and you can act upon the decision to make a match almost instantly, even with touchpad which can be somewhat slower than mouse or finger.

This transforms even more difficult and tricky levels where you need some time to think into a pretty smooth and swift experience because you can easily act upon your decision. This speed is part of what makes match-3 games feel good to play.

And once again, this feeling is lost in the console version of Azkend 2. As you’ve got a stick-controlled cursor which is not very fast, if you need to make a match that’s pretty far away from your currently made move… Well, it will take some time then to get to that part of the board. Doesn’t help that all levels in Azkend 2 are timed, and the difference it takes in time between making a decision and acting upon it makes it feel like you’re losing more time than you should’ve had. 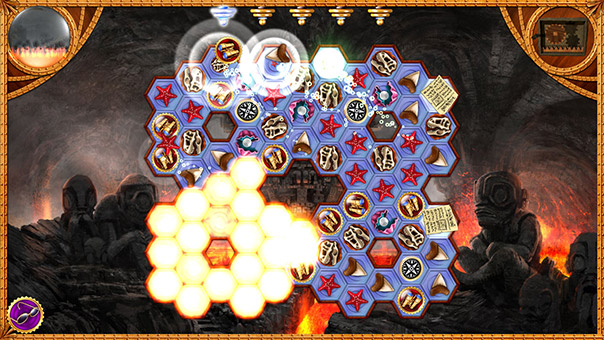 3 – Animation speed matches with control speed
Match-3 genre is fairly abstract. So these types of games don’t benefit from long and fancy matching animations. If you want to switch two elements, it is important that it takes pretty much the same amount of time as the mouse or finger flick.

Traditionally, the match-3 games that don’t feel as good to play are those where action considerably lags behind your cursor or finger movement. Here’s the thing though, it works the other way around as well – if it takes too long to make a quick action, it’s not enjoyable as well.

Azkend 2 on console doesn’t have any console-specific mechanics. It just uses left stick to simulate mouse movement and X button to simulate mouse click. What this means though is that there will always be discrepancy between the speed of controls and the animation speed, which in case of Azkend 2 on PS4 is faster (unless you make the animation speed really slow, but then the whole game becomes even more sluggish).

So these are the three main elements that make a match-3 game just feel nice to play and spend time with. A direct port from PC like Azkend 2 is, with a mouse cursor simulation, doesn’t leave any of those elements standing.

Which is why I think there’s a very interesting challenge to think about – how to make match-3 games feel good to play on consoles? Or maybe somebody already solved this, and Azkend 2 is just a poor example? I would be very interested to hear your thoughts on the matter.

Thank you all for reading. Feel free to leave any comments below. If you’d like to keep an eye on my future blog posts, feel free to follow me on Twitter @farlander1991 🙂